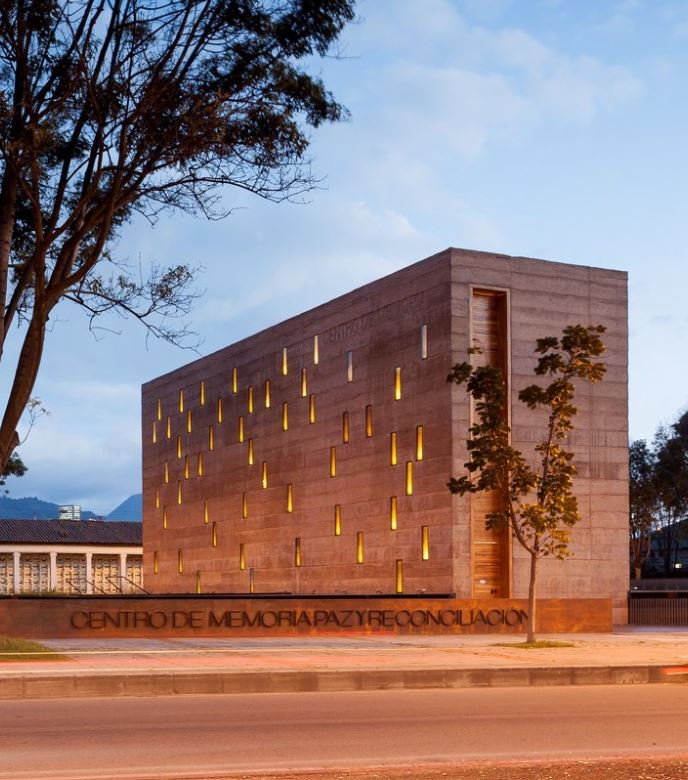 The center of Memory, Peace and Reconciliation conmemorates the victims of the Internal Armed conflict in Colombia and it uprases the values of peace, truth, justice and reconciliation. The building is respectful from the memory and unique conditions of the place, It invites the descent from the four cardinal points, allowing the visitor to have the experience of the inmersion. When descending, the body merges with the space, the visitor prepares to enter a unique place endowed with a solemn atmosphere of meditation and silence.

The Memory, Peace and Reconciliation Center is unique in the world because unlike other similar projects which have been built after the occurrence of a conflict, this center is currently being developed in the midst of internal conflict. It has the purpose of rescuing the MEMORY of victims of violence in Colombia from oblivion and seeks to promote a culture of PEACE and respect for human rights by means of actions of cohabitation and social pedagogy

At the same time, it is the materialization of an Independence Bicentennial memorial where values leading to the construction of SUSTAINABLE SOCIAL DEVELOPMENT are honored based on the respect of life, no violence, truth, justice and RECONCILIATION. It is about building a place that enables people to remember events that have occurred recently so that they do not occur anymore. In consequence, this center is an instrument of PEACE and dignity as it enables the closure and grief not only of persons and families that have been harmed but also of a society as a whole.

The edifice will be built in the historic center of Bogotá, at the grounds of the Cementerio Central, which is the main cemetery of the city. It will be located next to a metropolitan park.

The Center offers areas for the attention and assistance of visitors, meetings, divulgation, teaching and services related to the current problems of direct and indirect victims of the Colombian armed conflict.

The project understands the concept of sustainability as the capacity of architecture to generate balanced systematic relations with its natural, urban and social surroundings. Therefore, an environment low impact construction is proposed by respecting historic sites already built, with strong interdependences as to the urban surroundings and with an integral concept of social sustainability actively involving therein human networks affected by violence both at the local and at the national level. 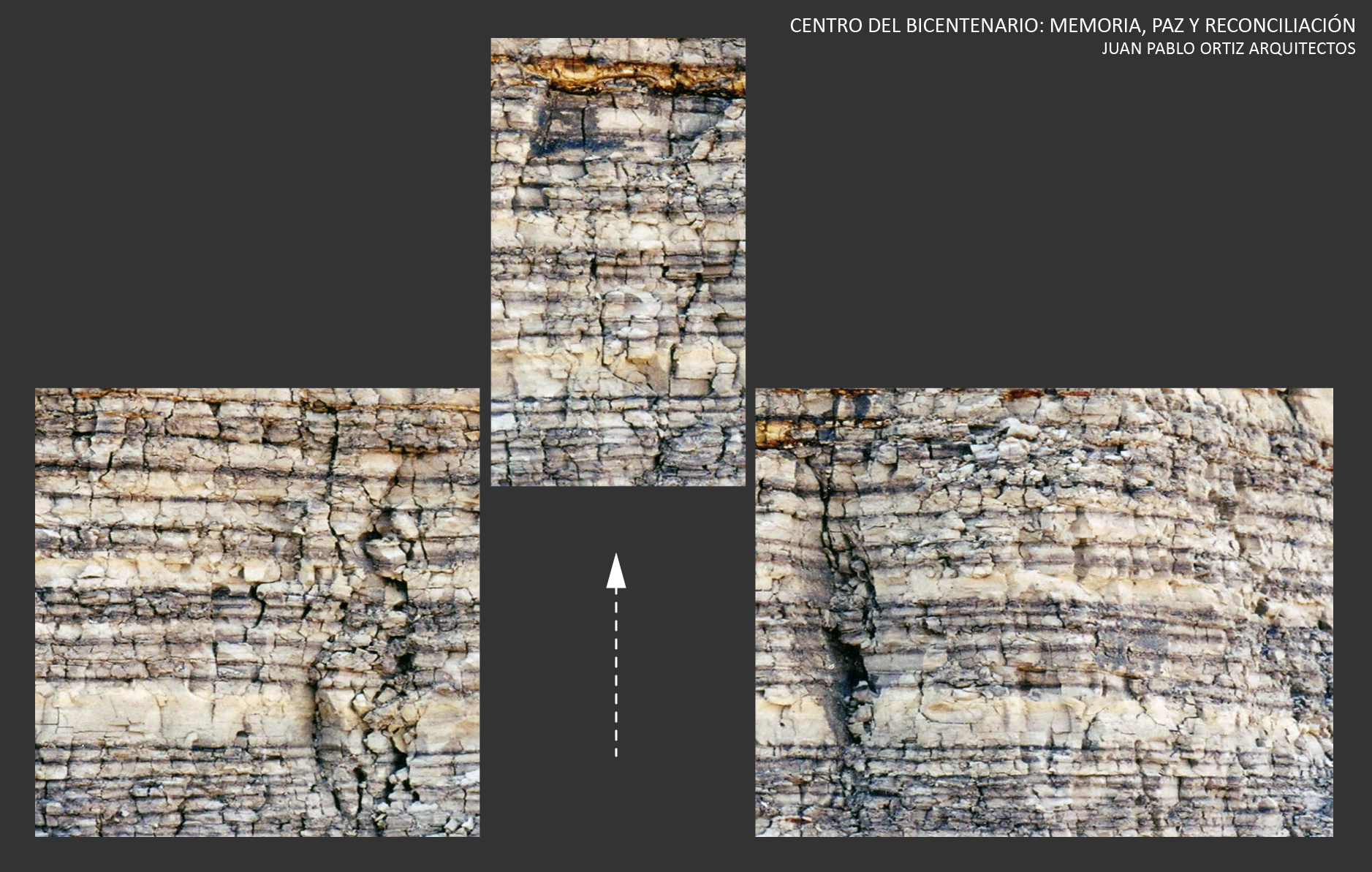 1. The project proposes a symbolic action to commemorate 200 years of independence by building a monolithic volume in soil emerging land with a 200 layer marked stratigraphy.

To find stable material with which this idea can be performed, a research that began with vernacular techniques of construction over enclosed land and grounds was conducted and it was concluded from lab tests that this material has stability limitations generated by organic material it has. As a response to this limitation, a new material composed of up to 90% of inorganic land and up to 10% of cement. Once the mixture was enclosed by layers, a chemical and mechanical process is initiated that exposes the gravel land components of 1.5” of diameter and sand. This material is not eroded as a result of the action of rain and winds and it can be used for constructions of certain height, therefore meeting the current seismic resistance rules.

2. This project won the pre-project public contest. It is proposed as model of sustainable social development understanding as social sustainability the capacity the building has to generate balanced interdependence relations between it and social groups involved. For that purpose, the project starting upon its construction seeks to build emotional significant relationships with victims of violence. Society related actions will be conducted during the development of the works that will actively relate this people with the construction.

It is proposed that land ownership is the origin of the Colombian conflict. Therefore, associations that represent population affected by the conflict will be called to perform 10 symbolic actions where 2,600 people will come to the site of the construction to make personal contributions of land brought from their places of origin along with 2,600 peace corps; these contributions will be a visible and integral part of the construction of the building. 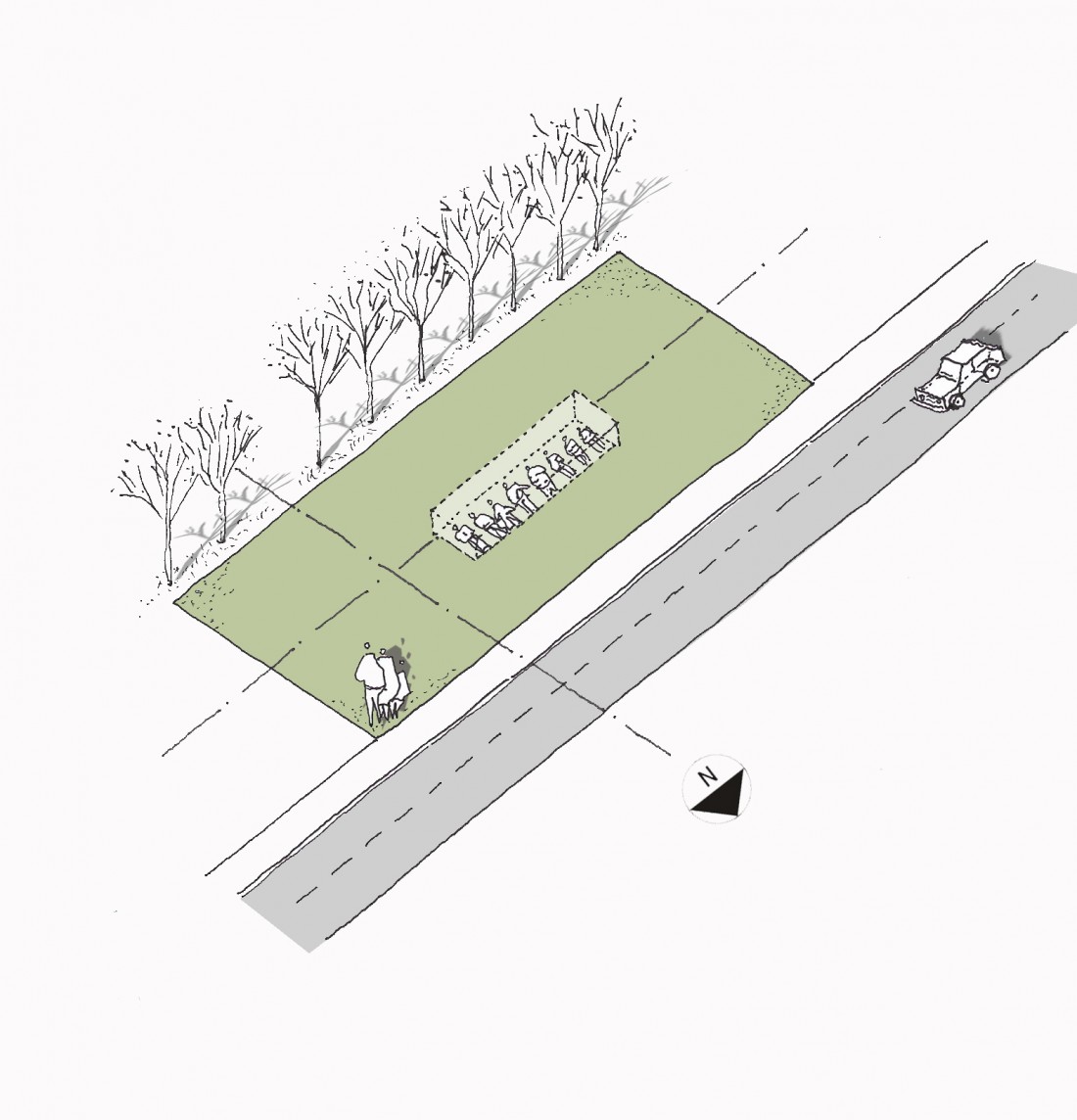 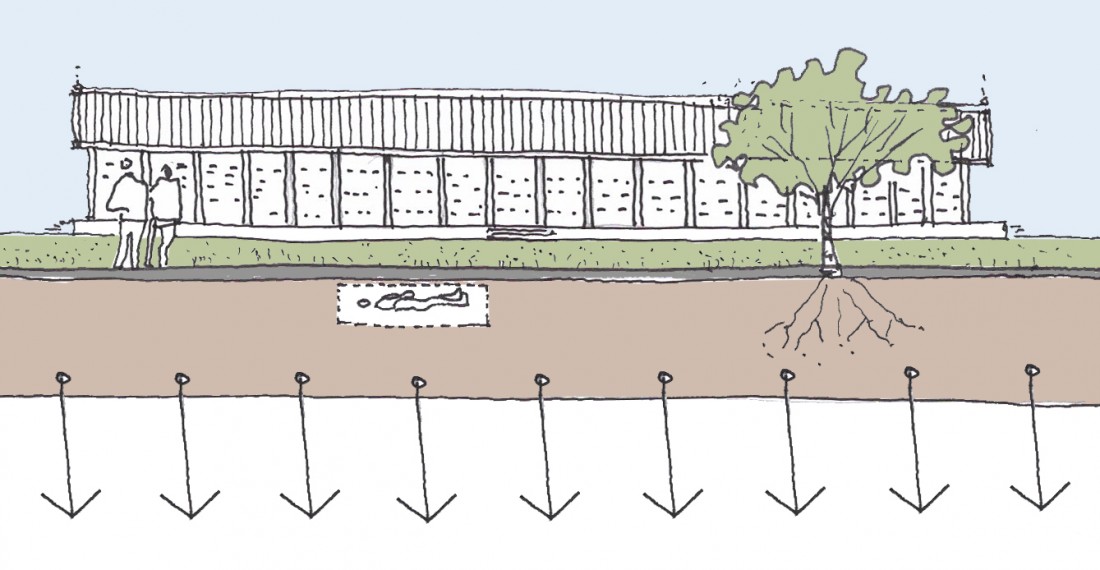 3. The building is located at the grounds of a cemetery, surrounded by historic heritage buildings and green areas. Therefore it is proposed that its mass be implanted under the soil in order to generate the least environmental impact possible. Hence, 99% of the green surfaces are restored and the park landscape is delivered with a cover full of recyclable water for irrigation purposes and bathrooms.

4. The construction of the project is 100% financed. Sixty per cent of this project is funded by the Mayor’s Office and 40% by the Local Council. Once the project has been completed, it will be part of the Secretary of Government of the city and it will guarantee its future operation.

A frugal atmosphere is proposed built with solid materials, long-lasting and low-maintenance which will not affect its operational budget.

5. The project is implanted as urban connector, as flow-organizing element capable of receiving and distributing pedestrian traffic of the park and surroundings.

An architecture that respects the cemetery, with silent and timeless features with a subtle recognition throughout the park landscape is proposed. It is built with local, solid and long-lasting materials.

The formal simplicity of the building enables flexibility and the change of use of spaces in the future. 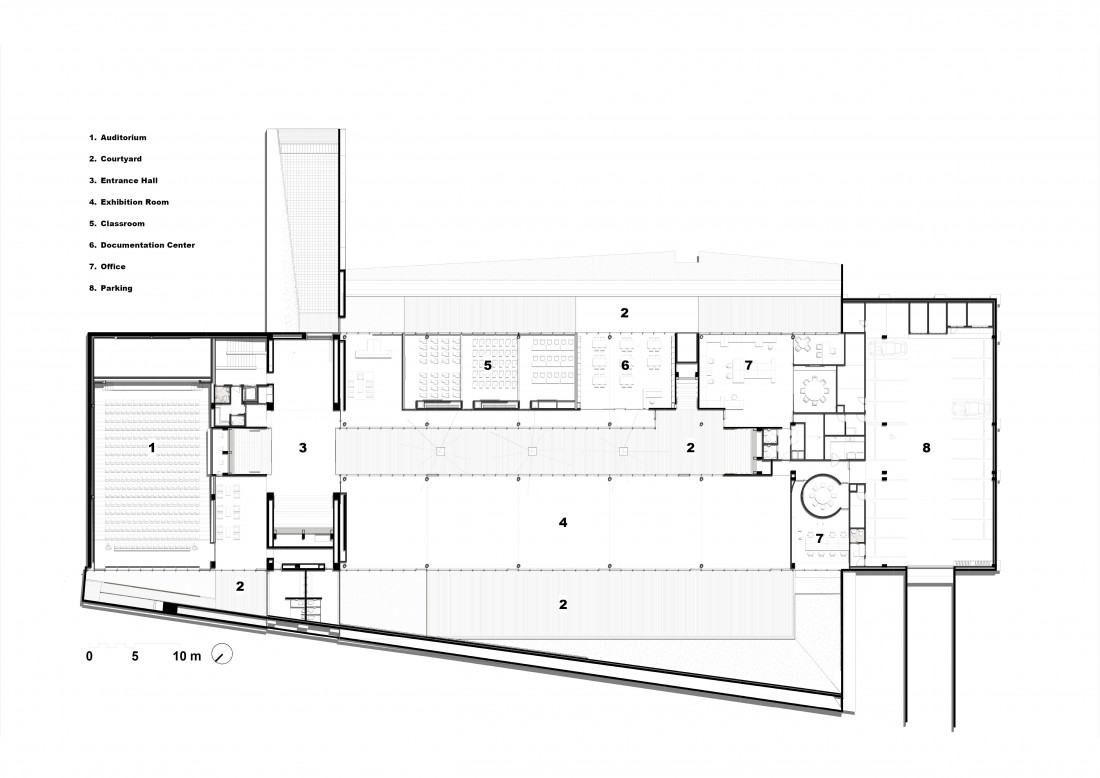 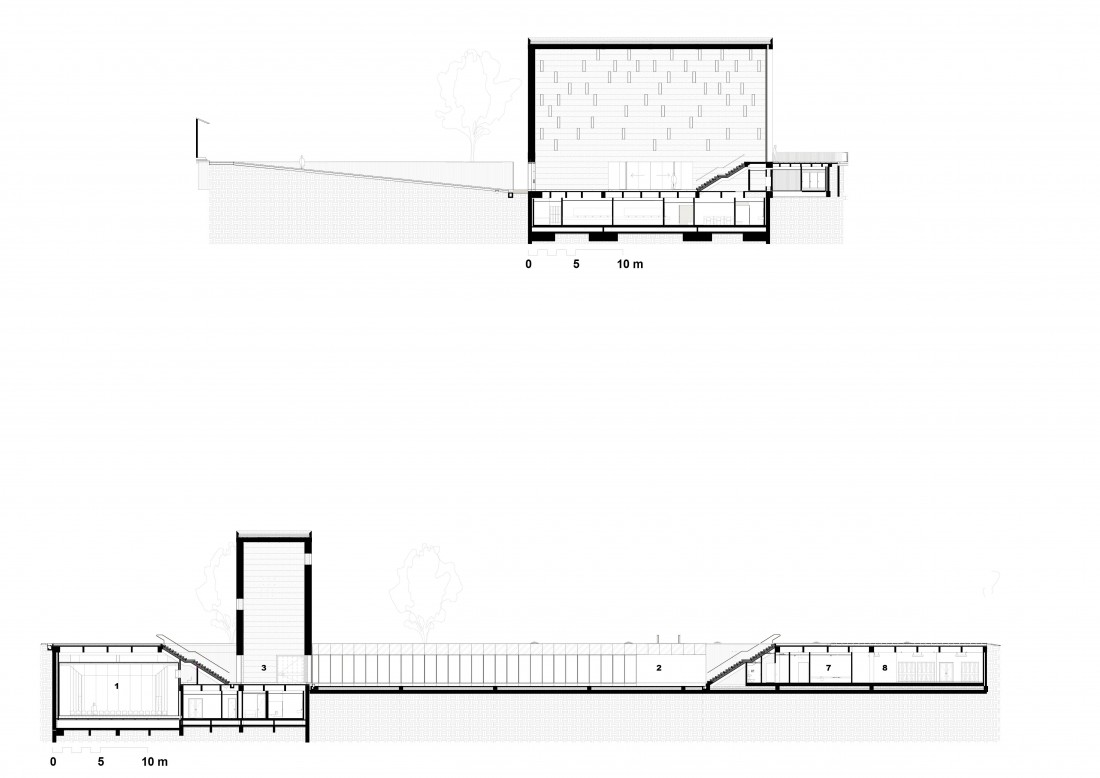 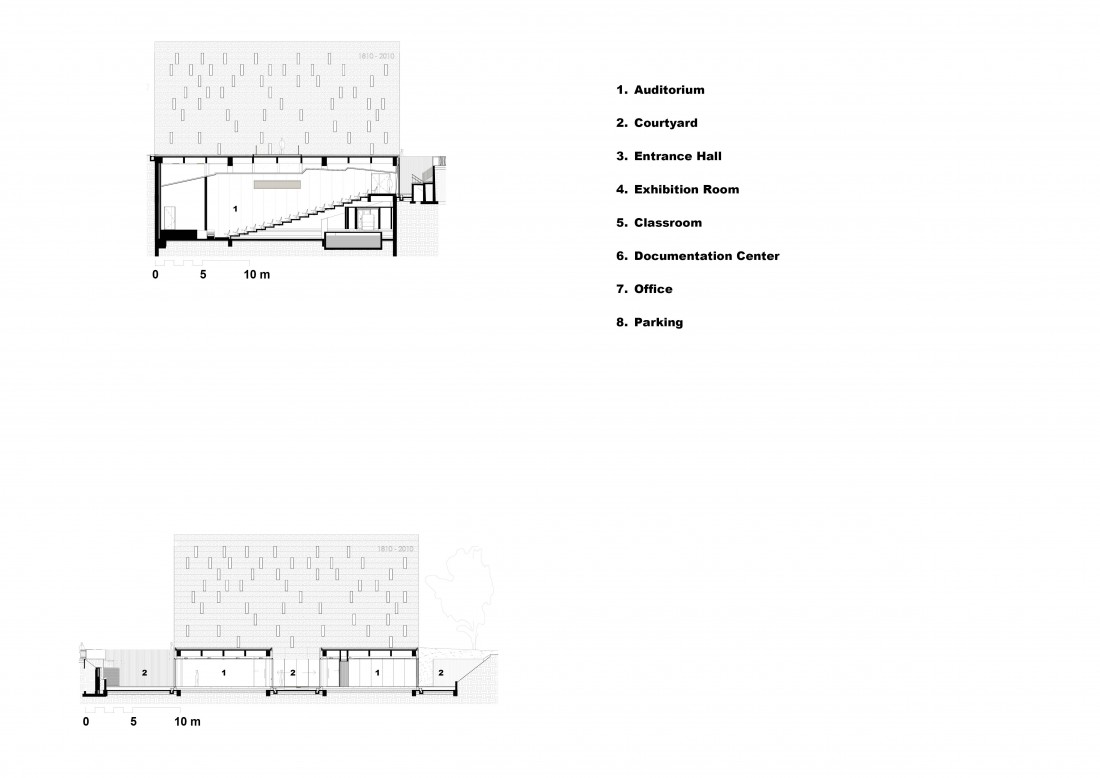